Saab Heritage Car Museum USA > News > News > The Saab that started it all!

The Saab that started it all!

My older brother Tim’s first car was a 1963 Saab GT850.  My dad wanted him to drive a safe, practical, and economical car.  The well built Swede fit that bill.  It became my car after the engine died and sat in the backyard.  Then it became my younger brother Thad’s car.  There is only one known photo we have from “back in the day” of the car.  I think that is me (could be Tim) behind the wheel in 1970.  I still own this car! 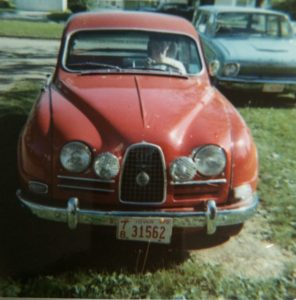 If you own one Saab you will soon own two.  The second Saab was a 1964 Saab 96, 3 speed. (I still own both these cars).  Soon both cars had bad engines and were sitting in the backyard. My mom said I was taking stuff apart by age three, and always loved “fixing” things. I was only 13 when I asked my dad if I could try to make one Saab run out of two.  He said yes and soon the 1963 GT was blowing smoke again!  Since I did not have my learners permit to drive yet I would cruise the car around our house in Carson, Iowa on the main street boulevard, much to our neighbors’ dismay!

I became pretty good at fixing cars, and at age 16 my dad arrange a job for me at the Saab, Fiat, Lotus & Suzuki dealership in Omaha, Nebraska, about 50 miles away.  My dad had became friends with the service manager Ray Pharchner at World Wide Imports on 50th and L. Ray is a fantastic man who became my mentor.  He later become a service rep for Fiat and then finished his long career with Saab. Anyone involved with Saab USA knew of Ray & his wife Laurie. He came to the US from Austria as a young man and become a successful self-made man.

I worked at several dealership & a transmission shop (Red & John Girdley’s shop Automatic Service Center).  I also earned a 2 year automotive degree from ICCC in Fort Dodge before starting my own business in 1980 with my life savings of $25.  I soon specialized in automatic transmission repair and rebuilding which paved the way to a decent living.

My real love is finding old Saabs. My dream day consists of “playing” with my Saabs, slowly restoring my favorites. When I can’t be playing with my Saabs, I can be found at Fort Dodge Transmission Inc, the transmission and auto repair business that I started in 1980.

Thanks for reading, and Safe Saab’in!

Your ticket for the: The Saab that started it all!

The Saab that started it all!

We Are Closed for the Season Other Than By Appointment.

Thank you and stay well.